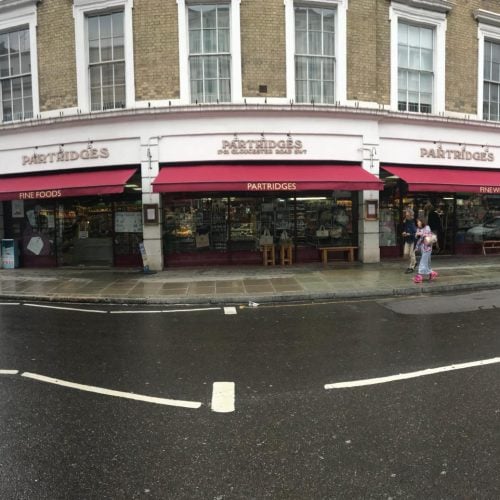 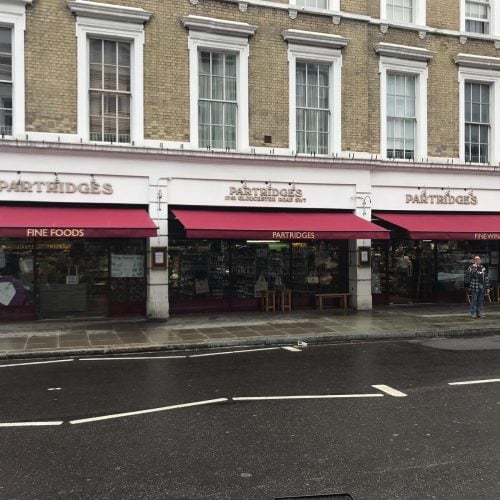 A new look for Partridges of Kensington as their store gets 3 new classic folding arm awnings. These classic folding arm awnings provide great shade in the summer, come in over 50 different frame colours and 100’s of fabric choices. Branding has been added to the valances for marketing which is carried out in house by our graphics team. Artwork is supplied and then the team turn the design into reality by scaling up the artwork.

The original Partridges was opened on 25th May 1972 by Sir Richard Shepherd in the fashionable area of Sloane Street in Chelsea, and quickly gained a reputation for selling the best quality foods from British producers and importing food and wines from all over the world.

The company slogan was, and still is, ‘good things for the larder’.

Today, Partridges is still very much a family-run business with Sir Richard’s brother, John Shepherd, now the Managing Director. In fact, it is one of the few remaining family-run food shops in Central London and still cherishes its original idea of providing the very finest quality foods.

Now located on the Duke of York Square on the King’s Road, the Partridges of Sloane Square branch features a café, a delicatessen counter, a weekly Saturday Fine Food Market and a huge range of American groceries.

Partridges was awarded its Royal Warrant in 1994 by Appointment to HM The Queen. Today, firms that hold the Royal Warrant include grocers like Partridges, wine merchants, chemists, plumbers, mole catchers and dressmakers. The distinguishing feature, no matter the size of the company, is to provide the highest standards of service.