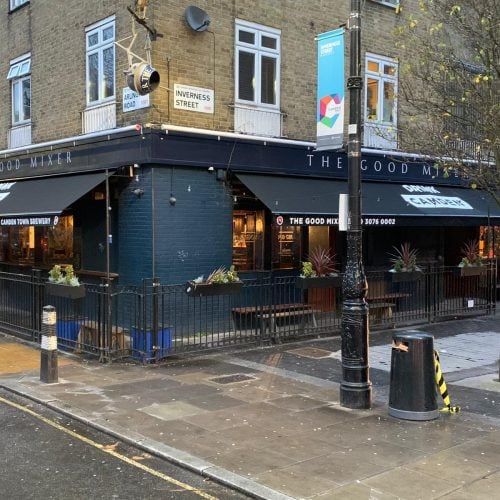 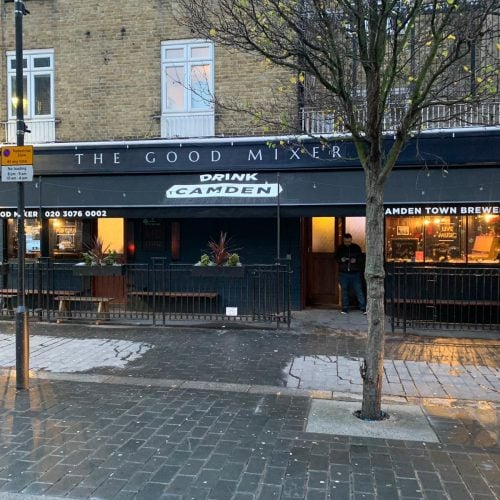 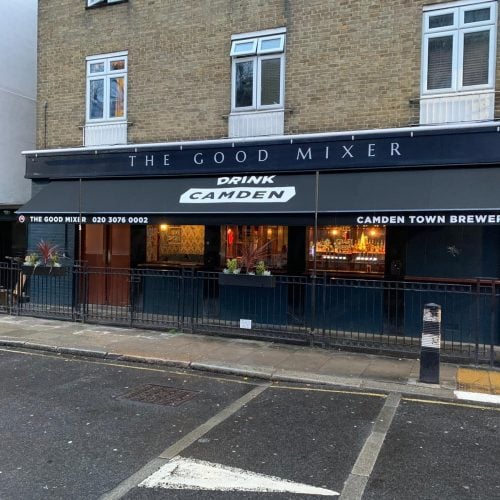 Another installation for Camden Town Brewery at The Good Mixer in Camden, North London. Radiant Blinds & Awnings installed two 11 metre wide folding arm awnings both controlled by remote control together with a wind vibration sensor. The vibration sensor retracts the awning automatically if it gets windy.

This folding arm awning can be 12 metres in width and project out 4 metres. It comes in 56 standard frame colours and there are hundreds of different fabrics to choose from.

All of our sign writing is is carried out in house by our Awning Graphics Department and we provide a scaled artwork approval so that you can see what it will look like.

About The Good Mixer

The Mixer has gone through many incarnations. Built on a bomb site in the 1950’s, its name is derived from the cement mixer that was absent-mindedly trapped in the pub during its construction.

Starting life as a working man’s pub, it gained notoriety as the drinking pub of choice for a long list of bands throughout the 90’s Brit-pop years.

The pub was the setting for the opening blow in the Oasis vs Blur feud where on meeting Graham Coxon for the first time Noel Gallagher reportedly said: “Nice Music, Sh!t clothes.”

The pub was where the band Elastica signed with Deceptive Records, where Menswe@r are said to have formed and was a regular haunt for many celebrities. Amy Winehouse was often seen playing regulars on the pool tables.

Today the pub maintains its laid back, good time vibes that made it famous and continues to be the go to Camden pub for musicians, locals and visitors alike.

WARNING: Strong winds are forecast in the next few days.

Please take care of your awnings by retracting them so they are not damaged.

You may find the information on our Awning care page helpful in looking after your awning.