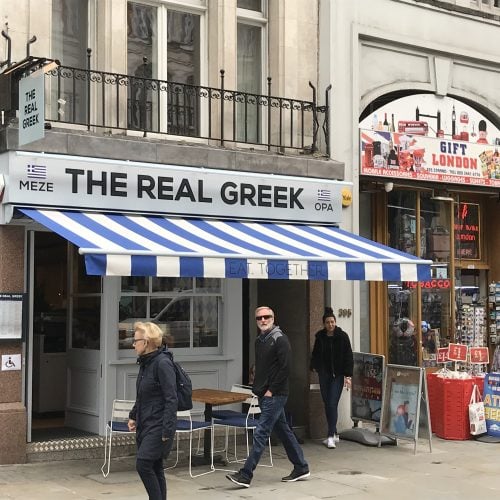 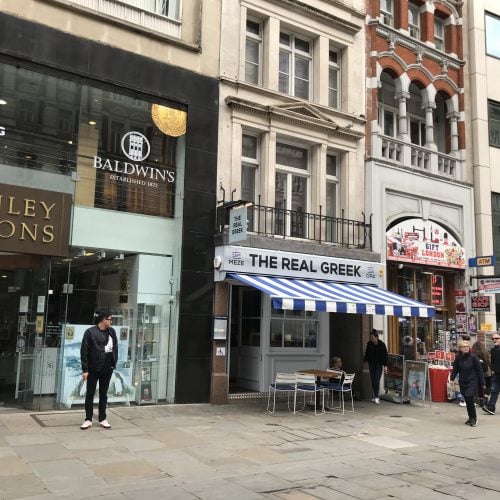 The Real Greek has just opened at 397, Strand, London. This ever popular restaurant chain is now up to 17 strong and growing. Radiant Blinds & Awnings were pleased to install a Classic Folding Arm awning which is finished to a bespoke frame colour. The awning fabric is a bespoke dark blue and white striped design made in our London factory by our in house fabric team.

The Classic Folding Arm is a robust, award winning awning that has been thoroughly tested and is used both commercially and domestically. It can be operated by hand or by a wireless remote control as well. We have 56 different frame colours to choose from or we can finish it to practically any colour in our finishing department.

Strand (or the Strand) is a major thoroughfare in the City of Westminster, Central London. It runs just over 3⁄4 mile (1,200 m) from Trafalgar Square eastwards to Temple Bar, where the road becomes Fleet Street inside the City of London, and is part of the A4, a main road running west from inner London.

The road’s name comes from the Old English strond, meaning the edge of a river, as it historically ran alongside the north bank of the River Thames. The street was popular with the British upper classes between the 12th and 17th centuries, with many historically important mansions being built between the Strand and the river. These included Essex House, Arundel House, Somerset House, Savoy Palace, Durham House and Cecil House. The aristocracy moved to the West End over the 17th century, following which the Strand became well known for coffee shops, restaurants and taverns. The street was a centre point for theatre and music hall during the 19th century, and several venues remain on the Strand. At the east end of the street are two historic churches: St Mary le Strand and St Clement Danes. This easternmost stretch of the Strand is also home to King’s College, one of the two founding colleges of the University of London.[3][4][5][6][7]

Several authors, poets and philosophers have lived on or near the Strand, including Charles Dickens, Ralph Waldo Emerson and Virginia Woolf. The street has been commemorated in the song “Let’s All Go Down the Strand”, now recognised as a typical piece of Cockney music hall.